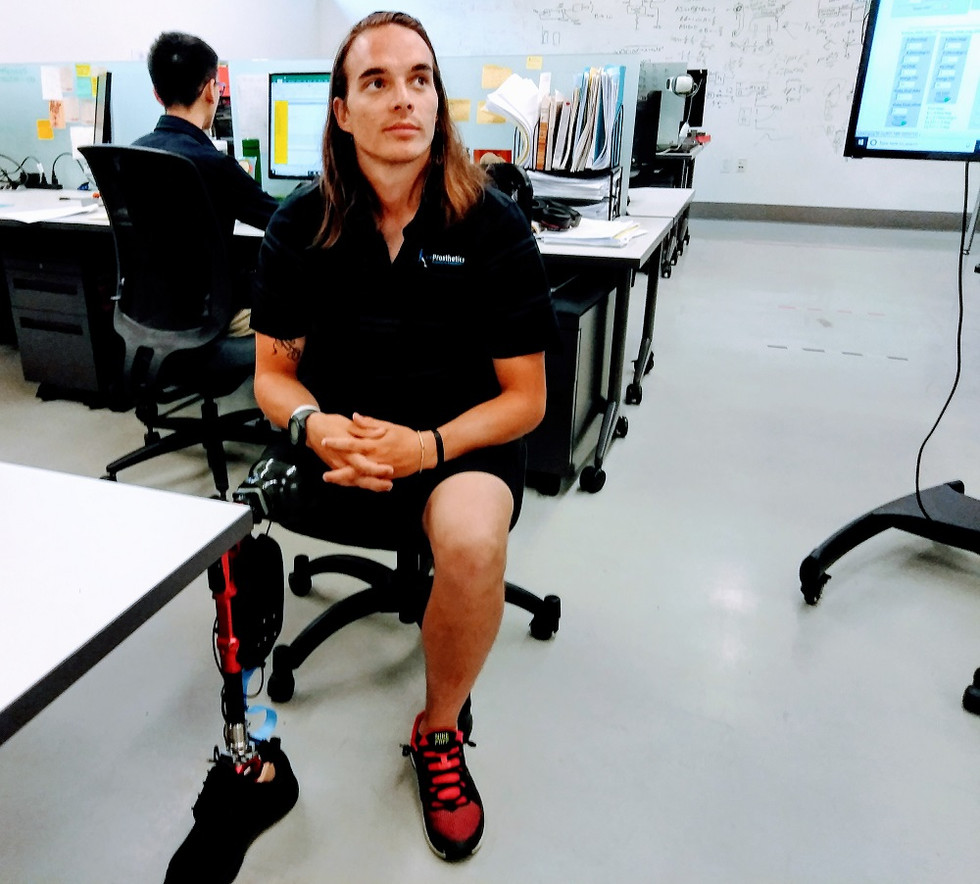 Alec McMorris is an amputee testing out advanced prosthesis with Dr. Tommaso Lenzi at the University of Utah’s Bionic Engineering Lab. We stopped by to see how the trial is going.
By S.C. Stuart October 4, 2018 8:00AM EST

On a recent visit to Salt Lake City, I had a flashback of watching Six Million Dollar Man reruns. I was interviewing an actual bionic man—Alec McMorris—or as he likes to call himself, “One of the first new emerging cyborgs; an amplified human.”

I met McMorris in the University of Utah’s Bionic Engineering Lab with Sarah Hood, a PhD candidate research student, and Dr. Tommaso Lenzi, Principal Investigator, who was recently awarded a $972,000 grant from the Department of Defense to further his work. Hood was checking data on the dashboard as McMorris prepared to go through the day’s physical tests on the surrounding equipment.

McMorris became an amputee in October 2013. One icy morning, while driving down the I-80 freeway, his cousin, who was driving just ahead, smashed into the guard rail. McMorris pulled over and got out to assist. Within seconds, a truck smashed into McMorris’ body at 85mph, causing severe injuries. He was on life support for five days.

In Dr. Lenzi’s lab, McMorris is participating in bio-medical clinical trials of technology intended to revolutionize life for people who require artificial limbs.

Usually, McMorris wears a passive prosthetic below his right knee, but in the lab, he swaps his for an advanced prosthetic with built-in AI and state-of-the-art engineering.

“Our research here focuses at the intersection of robotics, design, control, and biomechanics,” said Dr. Lenzi. “We are optimizing the dynamics of human-robot cooperation within the context of physical disability, developing novel transformative design and control solutions that will allow an individual with a physical disability to recover natural movement ability, leveraging the strengths of artificial technologies such as mechanisms, sensors, and feedback control.”

How the Advanced Prosthetics Work

The lab’s prosthetic adapts motor torque and speed when sensing the human subject is climbing stairs, sitting, standing up, or traveling fast on terrain. The ankle produces 130 Newton meters of torque and weighs only 800 grams, which lets it match the torque capability of the human ankle joint while walking without feeling too heavy, explained Dr. Lenzi.

In the lab, Hood was now ready to monitor McMorris’s physical tests. She directed him to start with the stair-walking trial. McMorris did this several times to familiarize himself with the transition.

“You want the user to be in control so it’s slightly different to building a fully autonomous robot,” Dr. Lenzi pointed out. “There’s no machine vision, for example. But it is following a few high-level rules that are hard-coded in the robot—i.e. the faster you want to go, the more energy will be generated into the gait cycle.

“It has to be intuitive in order to be effective. We have been looking at electromyography to track the signals generated by the muscles, but the most reliable way now is to combine them with mechanical sensors, which are embedded in the prosthesis,” he said.

It’s clear, after a few tries, that McMorris lets the bionic limb do its thing—powering his gait. It has its own momentum and force, allowing McMorris to move with ease, without hauling his hip joint into place, dragging a passive prosthetic behind him. This bionic limb has its own internal mechanics that are responsive to McMorris’ requirements.

“We’ve embedded adaptive oscillators,” Hood told me. “These are a mathematical tool that can learn any periodic signal and provide a smooth estimate of its phase and offset, enabling us to transition from a time-based to a phase-based control system.

“In effect, we’re building robotic limb prostheses and powered exoskeletons that are more robust, and adaptive, to natural movement variability. Experiments show that this control approach can effectively provide assistance by reducing the user effort during walking.”

While McMorris completed today’s tests, Hood recorded the data to track improvements over time, as well as incorporate changes that can be made to the prosthetic limb for his next visit.

McMorris now works for a prosthetics company, advising fellow amputees on the trials of, literally, rebuilding your body. Next up: a series of workshops on his experience at a nearby high school.

Dr. Lenzi told us he hopes this work will become widespread in the next few years. “University of Utah is opening a new Rehabilitation Hospital on campus in 2020,” he told PCMag. “This will be a state-of-the-art facility which will enable us to take our research to the next level.”

Dr. Lenzi first moved to Utah from Chicago because the university is “historically world-famous in the development of robotics systems,” he said. His lab is associated with the Robotics Center, which opened in 2016, where faculty are focusing on the field of rehabilitation robotics, surgical robots, micro robots, aerial vehicles, precision positioning, and bio-inspired locomoting mechanisms, actuators, and sensors.

Growing up in Italy, he was “always interested in robotics and and bioengineering, due to an early fascination with Japanese anime. I just thought it was the coolest field—especially because I wanted to actually build things, as well as embark on research alongside.”

He has plenty of company. As entrepreneurs are priced out of the Bay Area, New York, and other innovation hubs, tech talent is increasingly flocking to Utah, sometimes referred to as the Silicon Slopes.