SALT LAKE CITY, April 29, 2021 – The University of Utah (the U), ARUP Laboratories, and Techcyte Inc. announced today that they have formed a partnership to develop NanoSpot.AI, a less than five-minute, easy-to-administer SARS-CoV-2 antibody test. NanoSpot.AI is estimated to be significantly less expensive to manufacture than other SARS-CoV-2 antibody tests, so it has the potential to be considerably more affordable than currently available tests, making it possible to extend the test to every corner of the world.

The patent-pending NanoSpot.AI is performed on a spot of blood obtained through a finger prick. Individuals then receive their test results on their mobile phones. The test could be used around the globe to help prioritize who should receive SARS-CoV-2 vaccinations, or to easily and quickly detect whether individuals have some immunity against COVID-19 for travel or immigration purposes. Clinical studies validating NanoSpot.AI are currently underway. 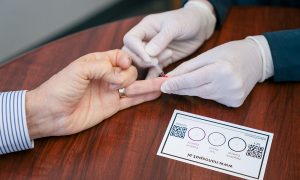 The NanoSpot.AI rapid COVID-19 antibody test is performed on blood collected through a finger prick using a microcollection tube. Droplets of blood are then placed on three spots on a ready-to-use, synthetic, embossed card. One of the spots displays the test result, while the other two spots are positive and negative controls for the test.

“Other antibody tests are available and are very good, but it takes time to get test results back and they’re relatively expensive,” said Hans Haecker, MD, PhD, who codeveloped NanoSpot.AI with Vanessa Redecke, MD, PhD. Both are professors in the U Pathology Department Division of Microbiology and Immunology. “Based on what we know so far, we believe NanoSpot.AI checks all the boxes,” Haecker said. “Because it is simple, fast, and very affordable, it can be done anywhere without specialized equipment, creating the potential for us to have an impact on human health around the world.”

­The partners in NanoSpot.AI created a video that explains the science behind the assay, demonstrates how the test is administered, and provides details about the AI used to analyze and confirm test results.

“As a national reference laboratory, ARUP has a wide view of laboratory diagnostics,” said Mark Astill, ARUP director of Research and Development. “The expertise and experience we bring enabled what may be the first instance of combining seemingly disparate elements to produce a rapid, economical, QR-code-curated, consistent, point-of-care result.”

All NanoSpot.AI test components are provided in a self-contained kit. The person administering the test places droplets of blood in three small spots on a ready-to-use card. One of the spots displays the test result while the other two confirm the test was properly run. Antibodies against SARS-CoV-2 are quickly apparent because the blood spot begins to separate within seconds when the test result is positive. 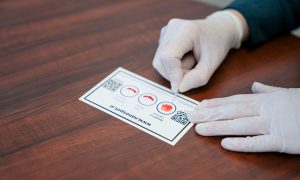 When blood spots collected for the NanoSpot.AI rapid COVID-19 antibody test are mixed with a predispensed, dried reagent on the test card, the blood spot on the circle displaying the test result shows agglutination that indicates SARS-CoV-2 antibodies are present.

To ensure accurate results, the person administering the test uses a mobile phone to take a photograph of the card, which is then transmitted to Techcyte for analysis using the company’s AI-based image analysis tool. Techcyte, a U startup company, is a developer of artificial intelligence (AI)-based image analysis solutions for the diagnostics industry.

Techcyte CEO Ben Cahoon said the company modified its digital diagnostics platform to work with images captured by mobile phones rather than microscopes for NanoSpot.AI.

“Our platform breaks each blood spot into thousands of features that the AI uses to statistically determine which specimens are positive for SARS-CoV-2 antibodies,” Cahoon said.

“This has been an extremely effective partnership and collaboration between the U, ARUP and Techcyte, demonstrating how university technology can be fast-tracked by collaborating with the right partners,” said Aaron Duffy, technology manager at the U’s Partners for Innovation, Ventures, Outreach & Technology (PIVOT) Center. PIVOT Center, which manages the U’s innovations and drives them to market, is now seeking partners to launch Nanospot.AI.

About PIVOT Center
The Partners for Innovation, Ventures, Outreach & Technology (PIVOT) Center leads the University of Utah’s centralized and integrated strategy and operation for technology commercialization, corporate engagement, and economic development. In doing so, PIVOT Center serves as a hub for the U to foster partnerships between industry, university, and government entities. The center formalizes the U’s commitment to broaden its impact on Utah’s economy by enhancing local and global collaborations to catalyze innovation. The center’s mission is to generate economic returns for the university and the state of Utah, expand the university’s reputation for innovation, and positively impact society. The University of Utah was recently ranked second among large research universities for “innovation productivity impact.”

About ARUP Laboratories
Founded in 1984, ARUP Laboratories is a leading national reference laboratory and a wholly-owned nonprofit enterprise of the University of Utah and its Department of Pathology. ARUP offers more than 3,000 tests and test combinations, ranging from routine screening tests to esoteric molecular and genetic assays. ARUP serves clients across the United States, including many of the nation’s top university teaching hospitals and children’s hospitals, as well as multihospital groups, major commercial laboratories, group purchasing organizations, military and other government facilities, and major clinics. In addition, ARUP is a worldwide leader in innovative laboratory research and development, led by the efforts of the ARUP Institute for Clinical and Experimental Pathology®. ARUP is ISO 15189 CAP accredited.

About Techcyte
Headquartered in Orem, Utah, Techcyte Inc. is the world leader in AI-based digital diagnostics for liquids and cells. Techcyte’s use of deep machine learning to perform automated analysis of both cellphone and microscopy images is revolutionizing human, animal and environmental diagnostics.